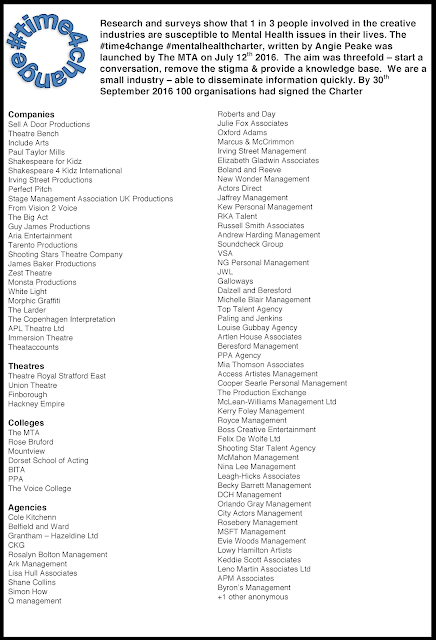 The #time4change #mentalhealthcharter has now been 'signed' by 100 organisations. 100! 63 agencies have agreed to send out the fact sheet to all their clients, present and future, 7 colleges/training organisations have signed up to promote good mental health provision within their faculties. People within those organisations have worked hard to ensure that their institution can commit to all the points that the Charter asks of them. 4 theatres, have agreed to 'source' and clearly 'signpost' mental health resources to all of their visiting companies. Finally 26 organisations from Accountancy firms to Vocal training groups...including nearly all of the 'new breed' of production company currently producing the goods off West End and in some instances around the World. Importantly this section includes technical theatre too with White Light and the Stage Managers Association agreeing to distribute the fact sheet.

This blog is just a huge thanks to these 100 companies who are trying to make a difference.  Thank you for allowing me to bombard you with emails and tweets. Thank you for making a commitment to do things differently.  Thank you in lots of instances for sharing your stories of why your organisation felt like it had no choice but to sign up to the charter.

The biggest thanks of all goes to Angie Peake who actually wrote the charter.  Donating time to the cause to both write up the charter, and in some instances supporting organisations/people to implement it.

These last 3 months have been such a rollercoaster ride. The excitement as the numbers started to grow, quickly followed by the lows of constantly having to bang on about a subject that just seems so obvious and evident in our industry, but yet wasn't really being addressed.  The highs of working closely with organisations to support them to be able to sign up to the charter, followed by the lows of other people's agendas hindering progress on a larger scale.  The highs of actually connecting with a lot of new people, followed by the lows of being perplexed by long term work colleagues, and even friends, coming up with silly excuses as to why they were unable to commit 'at this moment in time'.

The highs of hearing about shows starting with all the cast/crew being presented with the charter just as a matter of course, followed by the lows of finding out that someone had signed the charter but hadn't actually sent it out to their cast/clients.

The best highs of all - the emails from people that the charter had resonated with, and indeed had helped.  I said at the beginning that even if we were doing all of this for one person, then it would be worth it, but we already know that it's helped more than one.

The campaign goes on, colleges have to sit down and discuss how we can ensure that the Charter's practises are working? How peer supervision will work to keep the charter alive?

More colleges need to sign up! We need to work together to solve this problem. We need more theatres outside of London to sign up...as the chances are that people could find help in their home city. . . but they wouldn't have a clue where to start should they be working away from home.

The charter will be an ever evolving piece of work - however having committed the last 3 months to promoting it, plus a few months before that prepping it, hosting the #time4change conference etc, it's time for me to return to my 'crap' job, as The MTA gets ready to welcome our 8th year group and begins to hunt down a 9th.  It's also time for me to really focus on my 'real' job, as I need to write a panto, and produce some backing tracks....plus tweak an older show...and start work on a brand new show.

Now that we've started the conversation - let's all try not to block it.  Let's keep talking about #time4change and encourage people to commit to it - as therein lies the secret. A simple, free charter, low maintenance to implement. . . but potentially a game changer for a lot of people.

The moral of this story though - never tell a short Welsh person that something can't be done - it's a little bit like a red rag to a bull.  Don't dismiss an idea before you've tried it. Just because you can't visualise it. . . remain curious, and give it a go.

In impro we teach not to block and to be accepting of new ideas.  Not a bad motto in life I reckon.